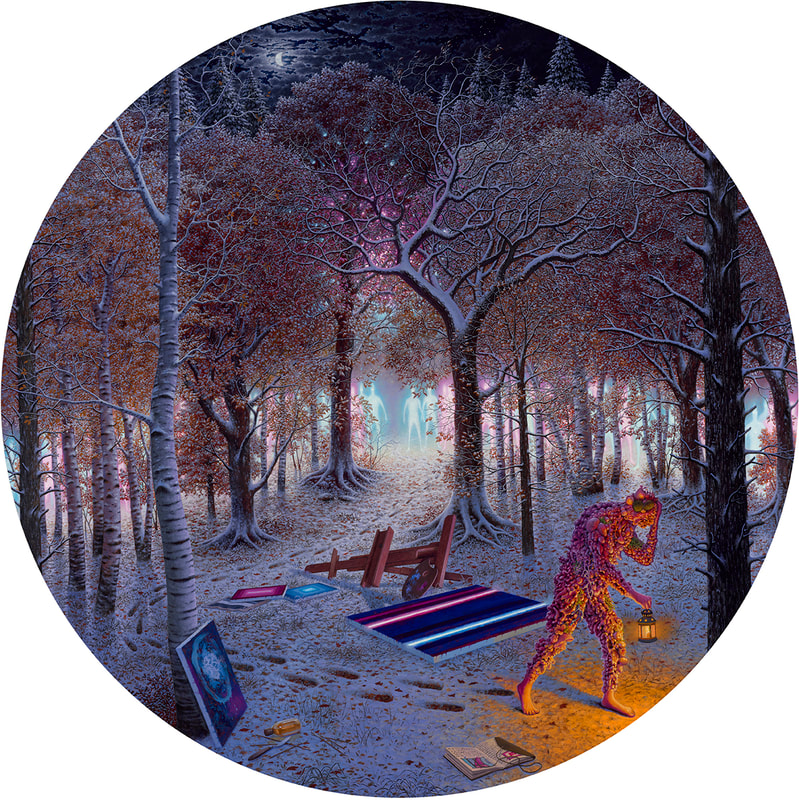 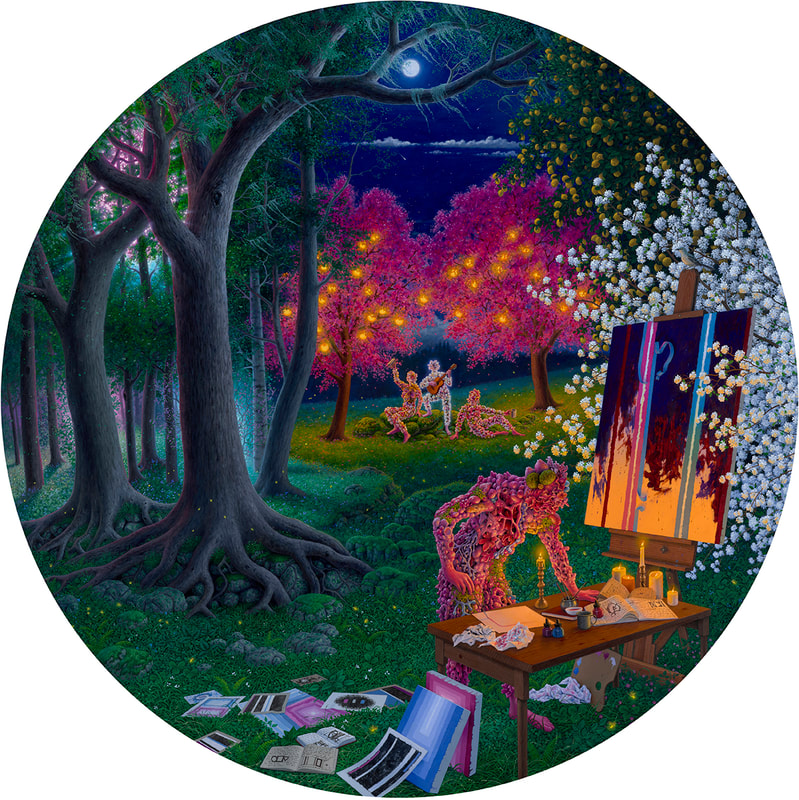 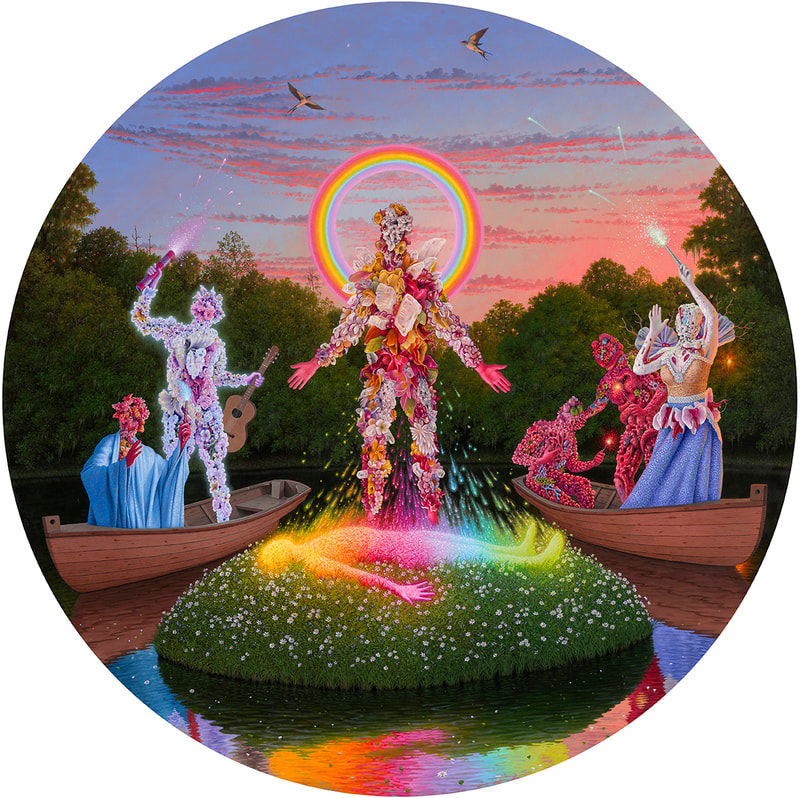 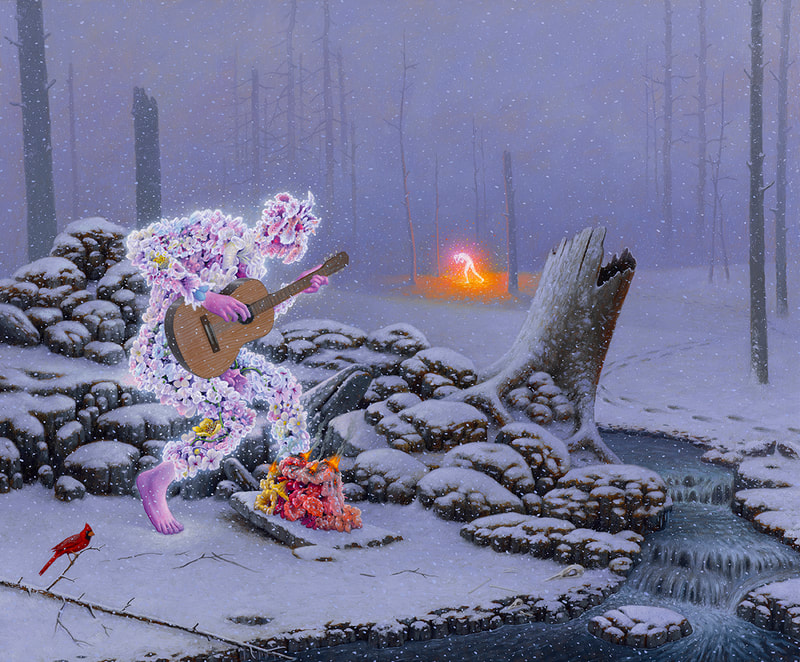 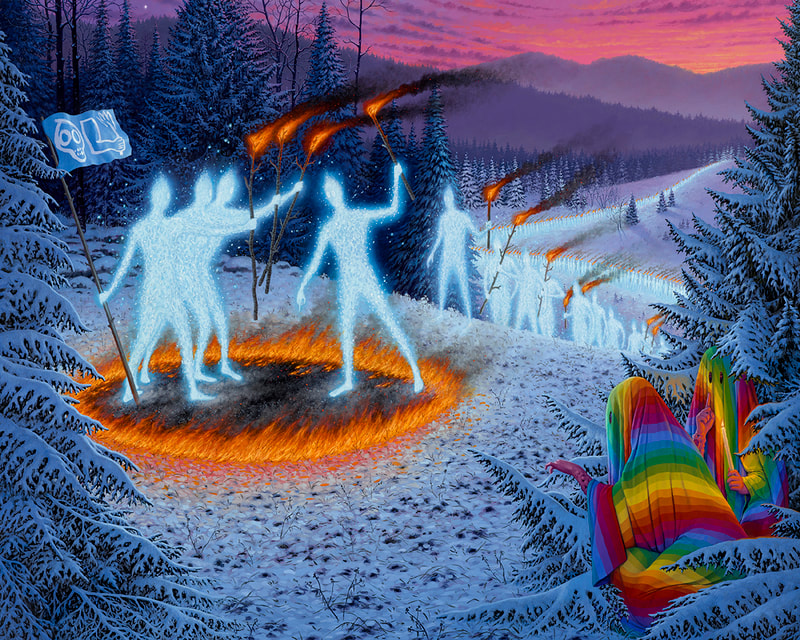 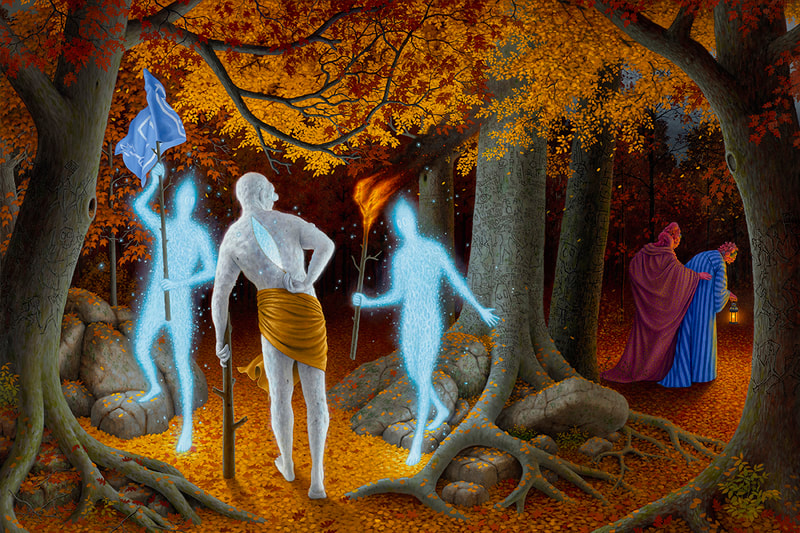 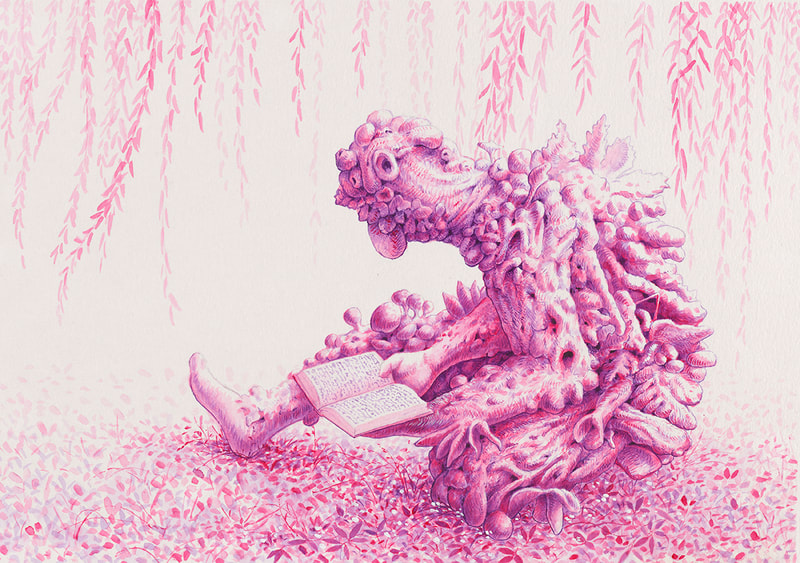 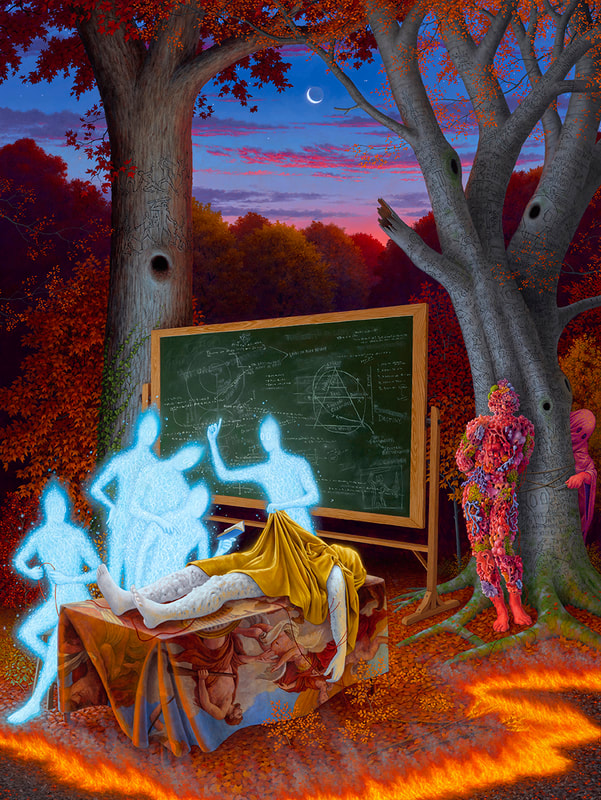 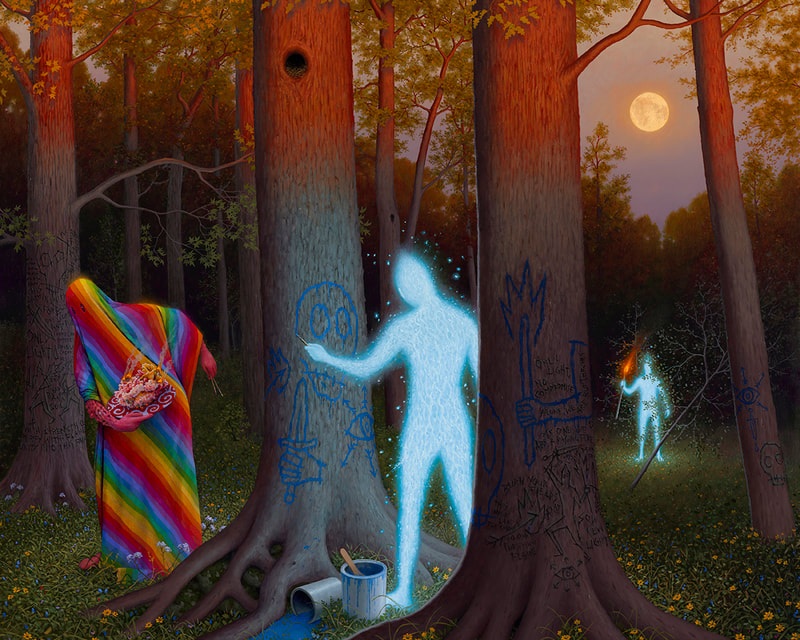 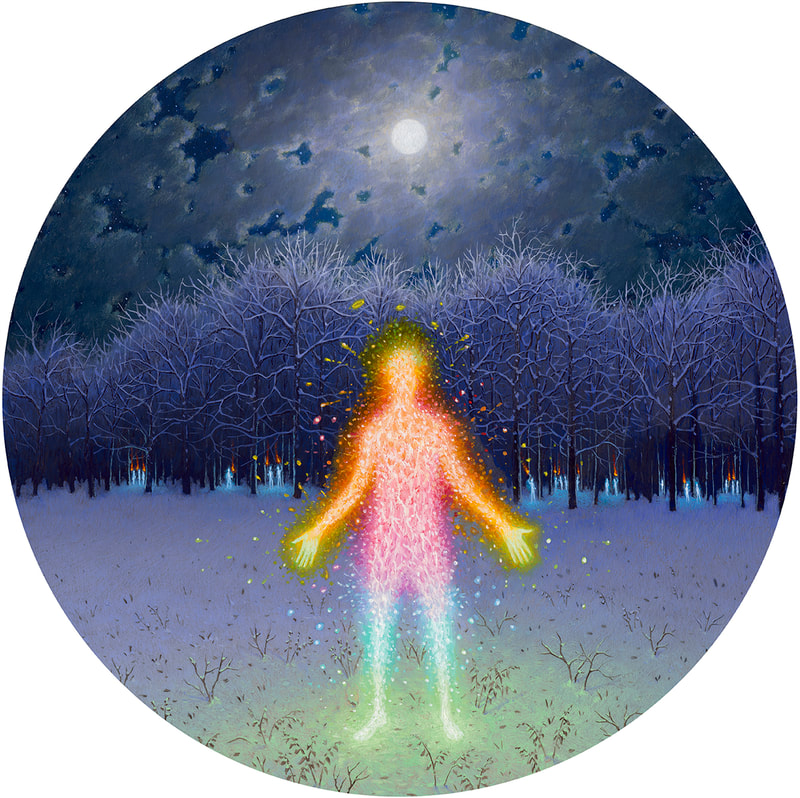 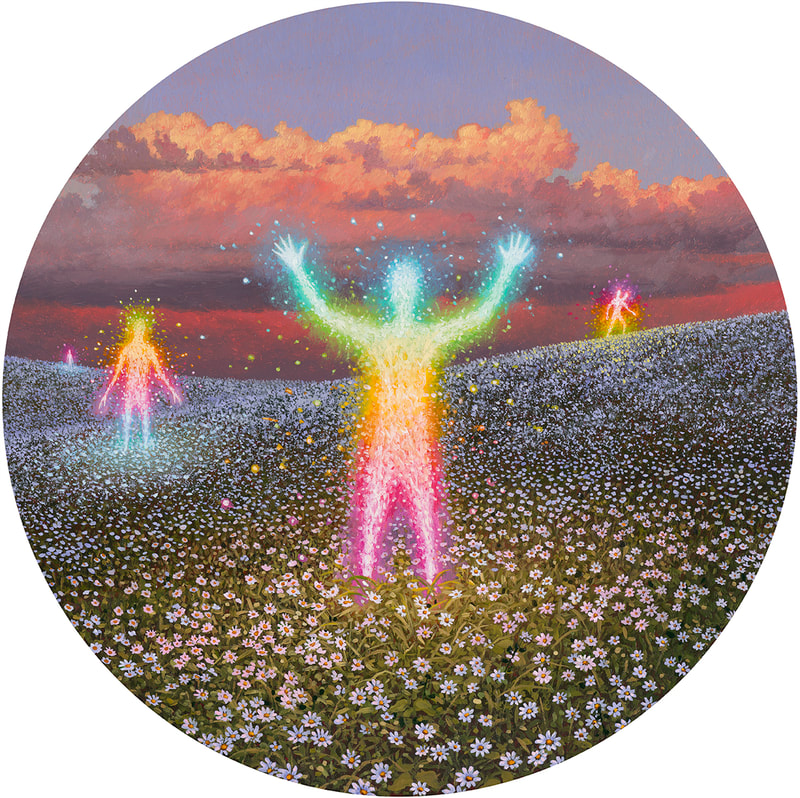 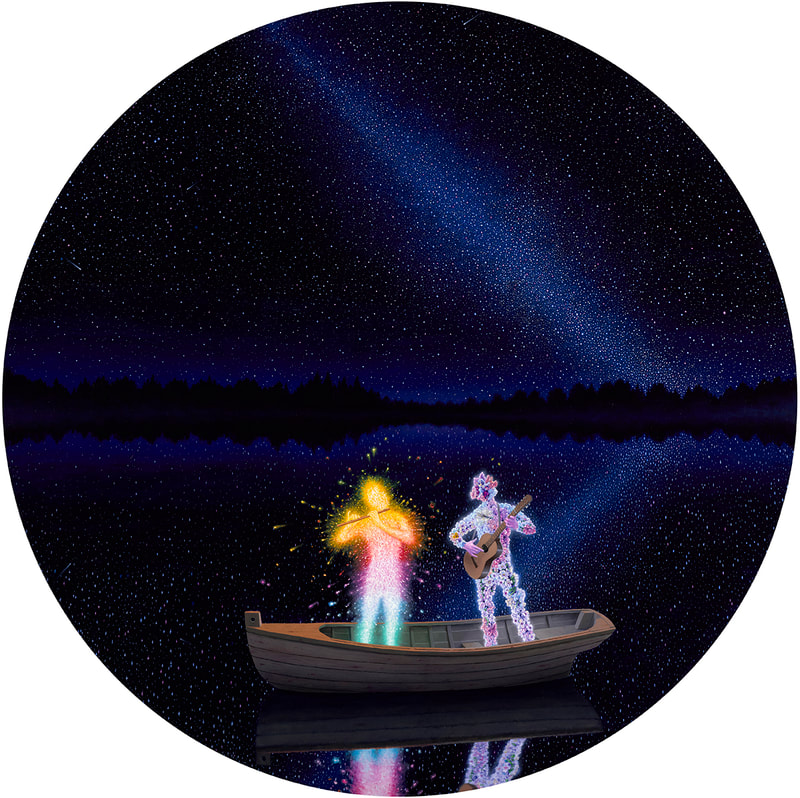 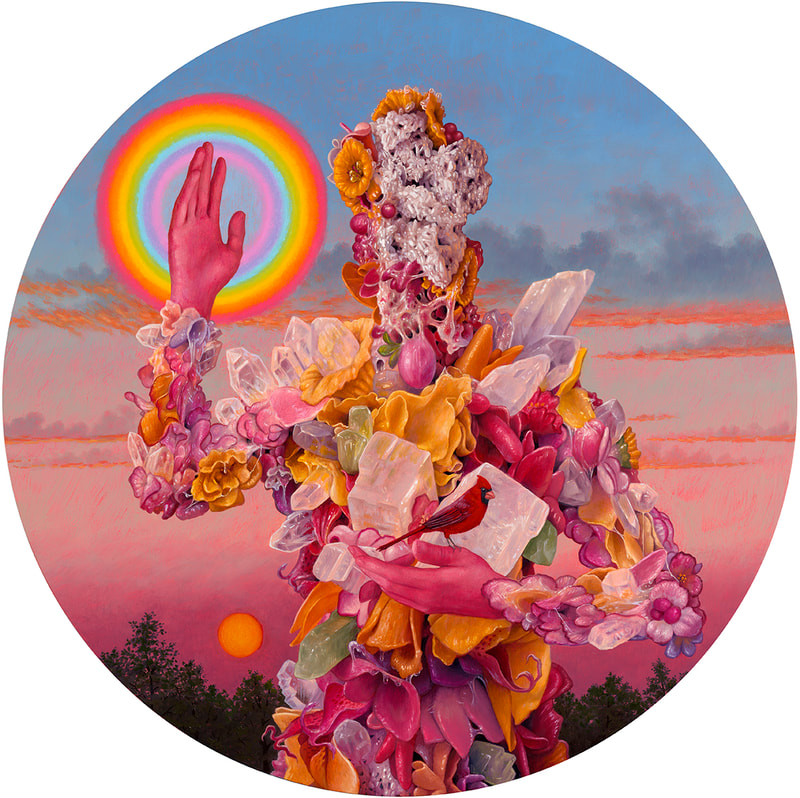 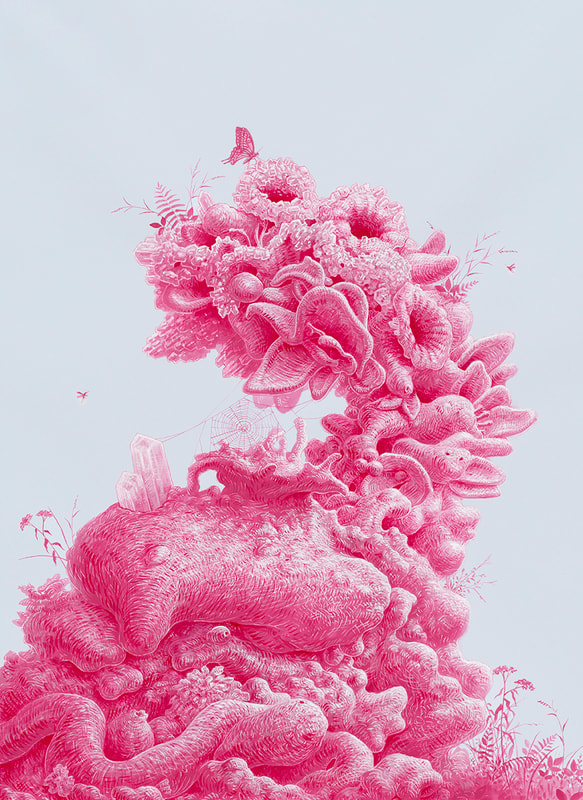 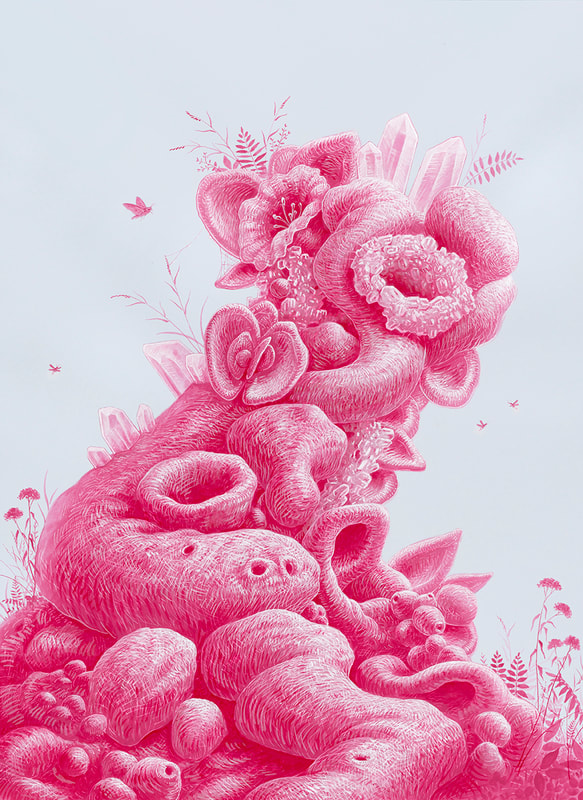 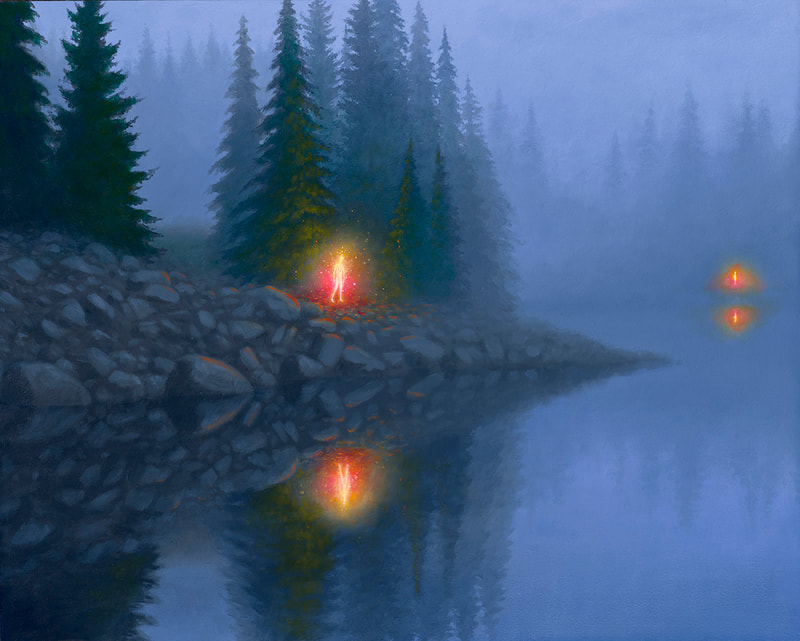 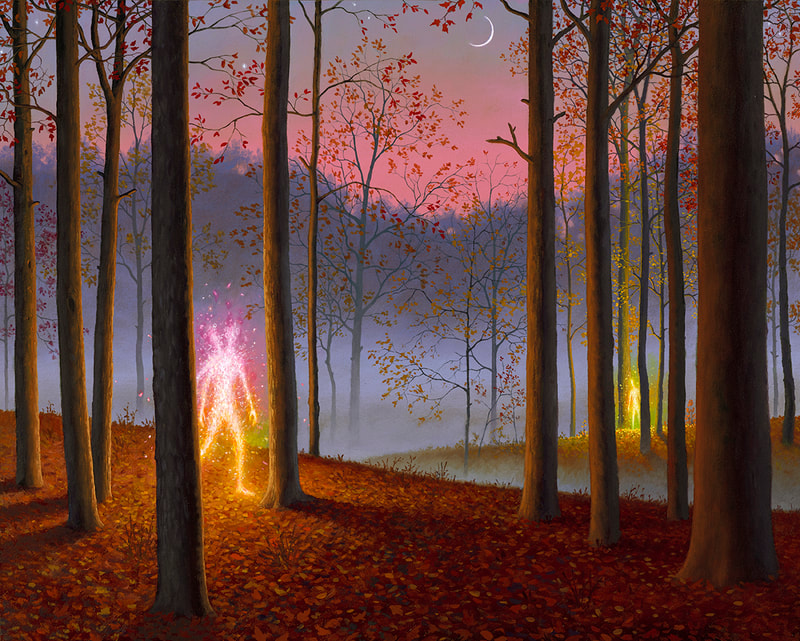 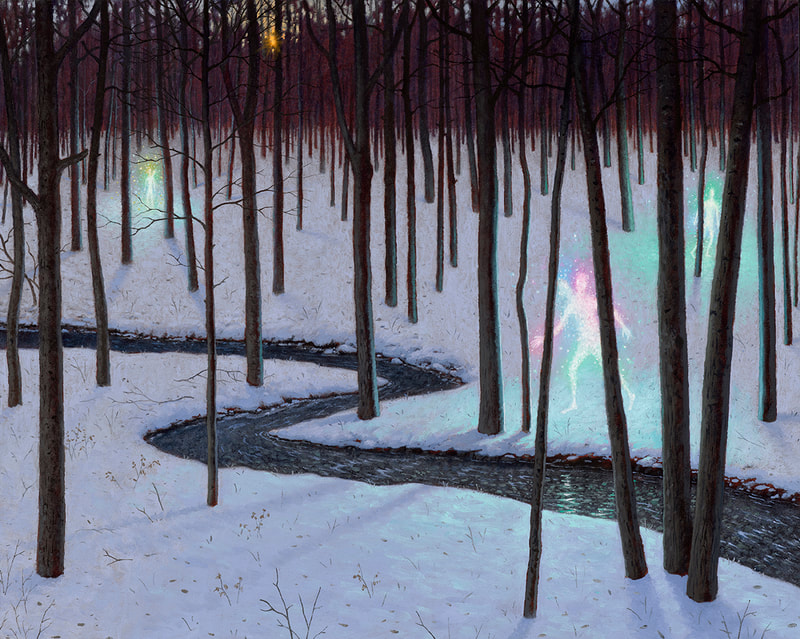 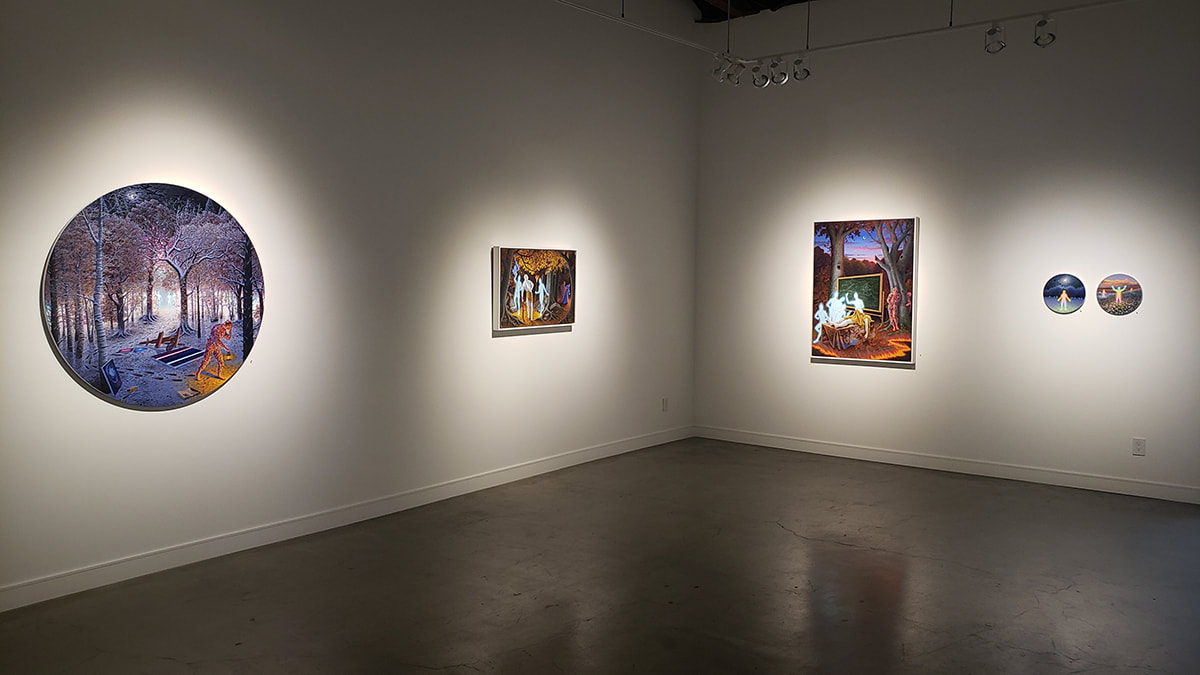 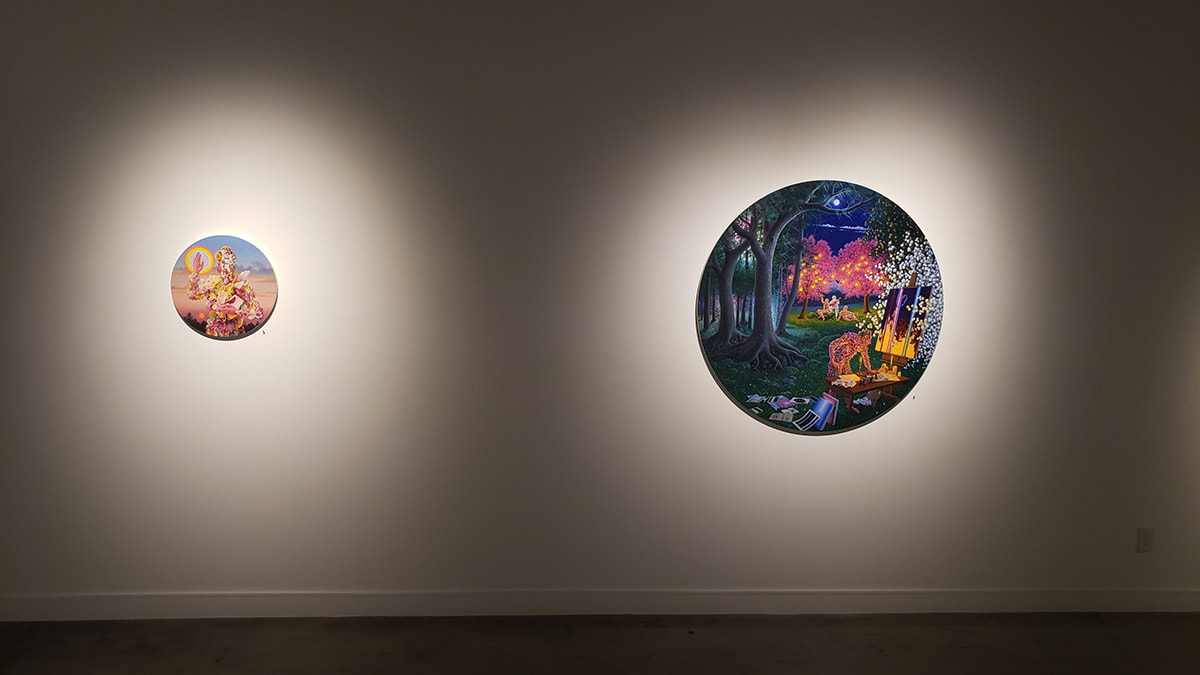 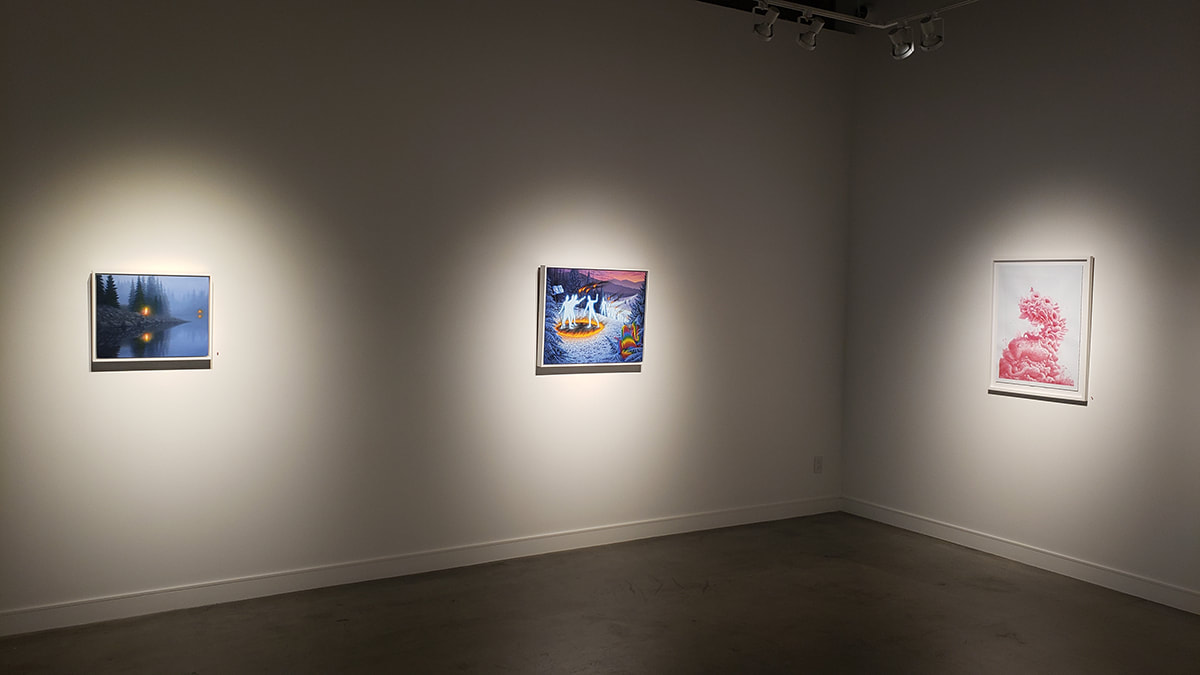 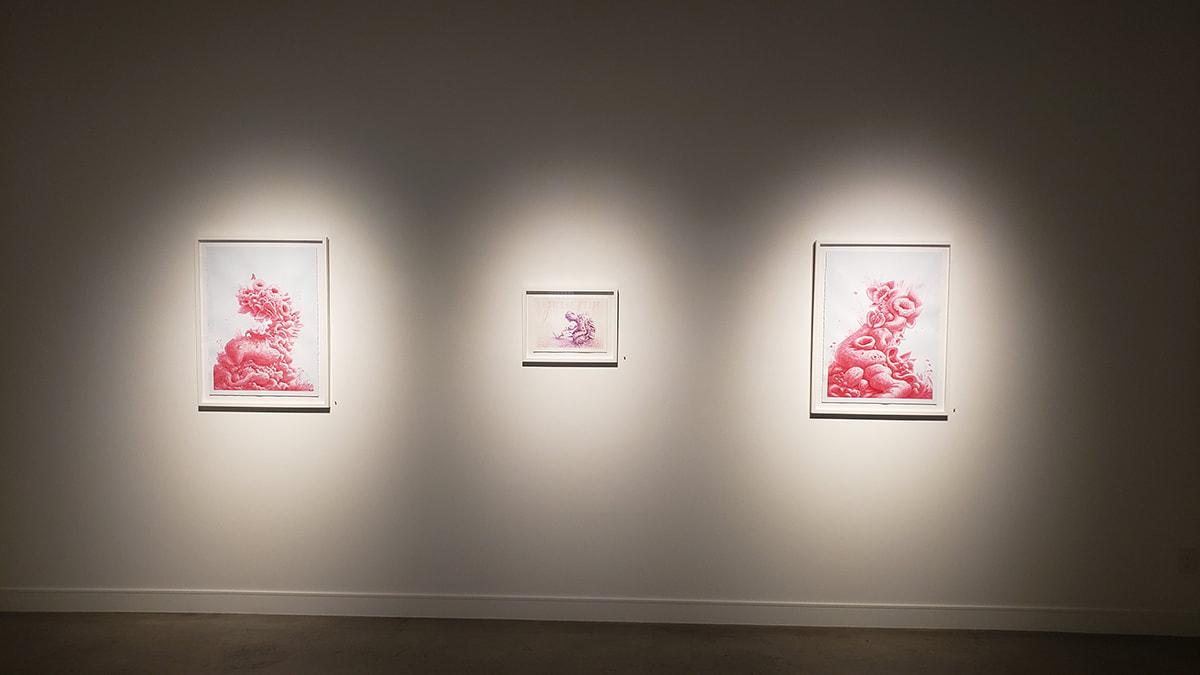 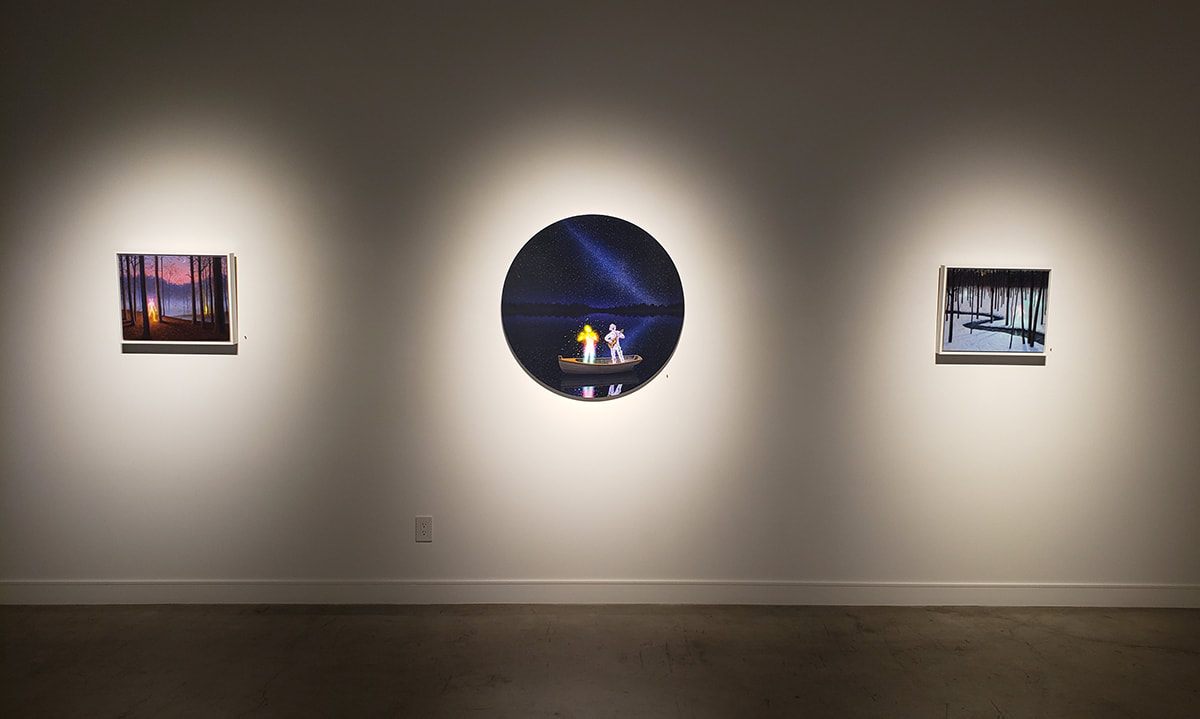 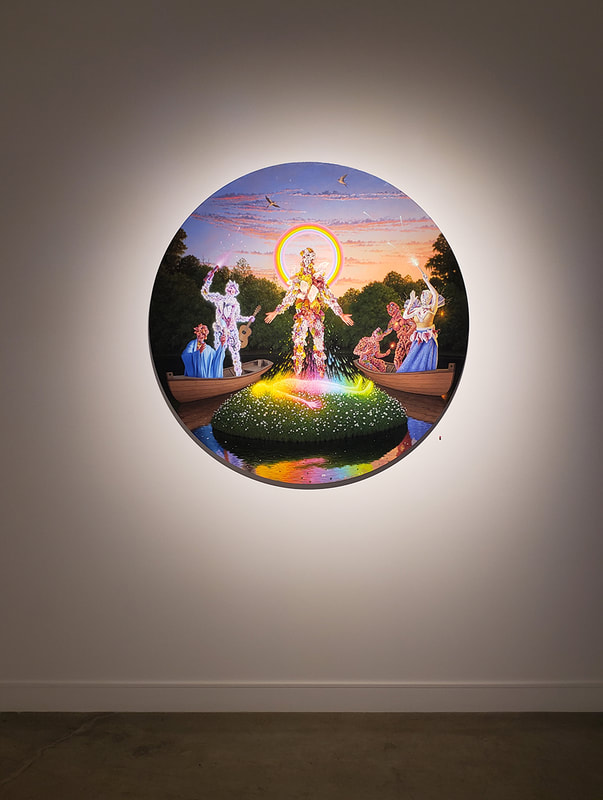 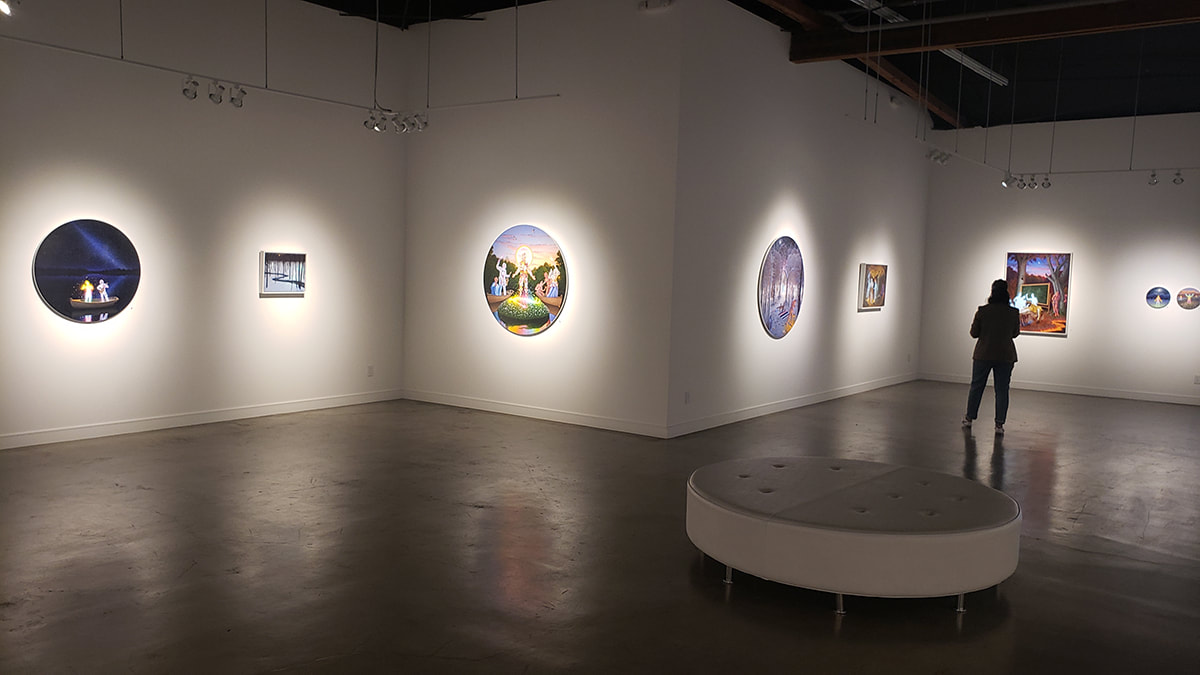 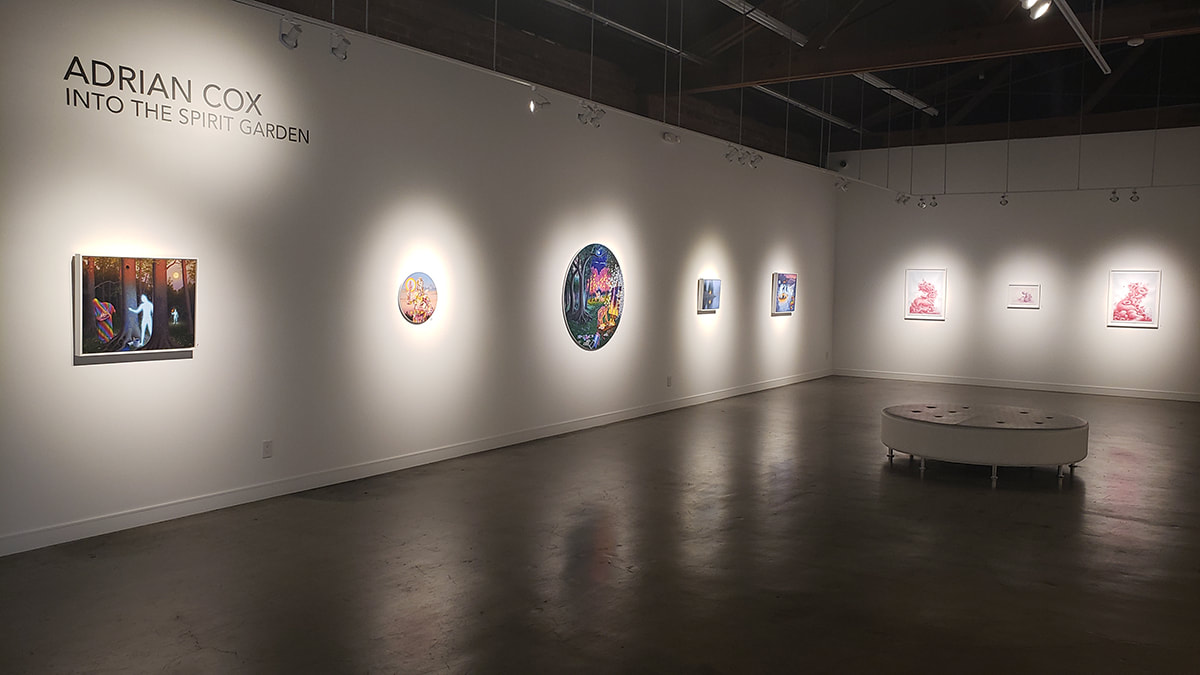 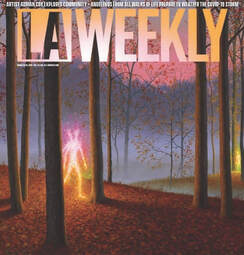 Investigating inter-human relationships and the art of figurative painting, Los Angeles-based artist Adrian Cox calls on his own sci-fi supernatural mythology in his second solo exhibit, “Into the Spirit Garden.” Currently installed at Corey Helford Gallery, the incredible collection of Cox’s new work vibrates around a mythical journey his characters take through power, redemption and, finally, community.

This epic tale is guided. It’s a call for a larger manifestation that exists in both the story and the artist’s personal approach to painting. Cox tells the Weekly, “Central to the work is the power of empathy and the ability to share feelings that are outside of yourself or other than yourself.” Setting up a world with infinite ways to explore humans and their relationships to themselves and society, Cox paints stunning scenes in oil of glowing beings that lack genuine dimensionality as they plot against ethereal creatures, and ultimately themselves.

In his world, specters, conditioned and void, exist to be elevated over everyone else, to be separate. Borderland creatures create balance, drawing from a beautiful symbiosis with flora and fauna. The show’s cosmic series of paintings charts the descent of the specters in yet another plot to suppress the surrealist, organic nature-beings. Intriguing and subversive, the narrative peaks with the ascent of the spirit gardener, a dazzling pink and yellow human figure formed of crystals, flowers and a rainbow glow. This is who we all are — seen as consciously, fully realized in Cox’s art.

In The Oath of the Spectral Brotherhood, a herd of glowing specters march in a ring of flames. “With the specters, it’s a total isolation from the world,” Cox says. “It’s this idea of separating oneself from others and from the natural world, so they become this playing out of the ego, playing out of the id. The border creatures down here are hiding with rainbow cloaks, with the humor that these ghost costumes they wear, that’s how they protect themselves.”

Giving expression to these ideas and archetypes, Cox draws and paints an experience of otherness and isolation, and how it impresses on fellowship. Growing up in a closeted transgender family in Conyers, Georgia, he lived in a heteronormative-conditioned society, while gender identity issues continued to expand but remained marginalized within the larger community. Thanks to the support of the thriving LGBTQ community of Atlanta, Cox could examine the sociology and politics of polarization in its many forms while developing his art practice at the University of Georgia. He later obtained his M.F.A. from Washington University in St.Louis. Ultimately combining his interest in figurative style with a unique story, he’s created a large universe to explore painting styles and forms, while building relevant subjects with potent themes.

In Constructing the Pneumatic Vessel, the specters conjure their own meat-suit disguises as they charge ahead for power, forging a costume to infiltrate the society of border-creatures. In Awakening the Pneumatic Champion, the specters are ready to rumble, as one zips up the meat suit, transformed to act the part. The large trees hover over the conspicuous scene while border creatures sneak off, cloaked, into the distance.

Moving to California, Cox explained he wanted to be in a creative center, while still living in close relation to the natural environment. His personal connection to flora and fauna are depicted in the intricate backgrounds of his rich paintings. Utilizing saturated colors and contrast, he designed these mystical scenarios to play and experiment, not always with any didactic in mind. Instead, he seeks new aesthetic approaches, related to the history of figurative painting and abstraction. Looking to Willem de Kooning, Lucian Freud and Francis Bacon, Cox engages in twisting and manipulating the human form for an effect beyond the narrative.

Cox adds, “It was more of a theoretical interest, this idea of embodiment and making the boundaries of physical form flexible in order to speak to making the conceptual boundaries of self flexible. That was where the term border creatures came from.”

Combining these concepts, this exhibit sparks conversation, humor and introspection. Hoping to inspire others to find the communion around us all, Cox explained, “I think this ties into my interest in how we treat people who are other than ourselves, whether that’s in gender identity or sexual orientation or race. Also, I’m equating that with the way that we view the idea of nature. For me, those two things are connected, because it’s this thing that’s outside of us, and there comes with this idea of elevating ourselves above nature, or separating oneself above nature in ideological terms. It’s easier to parse things out into categories that are distinct and separate from you, and this is where that confluence, where these figures are an intersection of nature and man, and an intersection of genders. ‘Into the Spirit Garden’ is a story of finding a space between heaven and earth, soul and flesh, a space in which the ties of community are the very soil in which our spirits grow.”